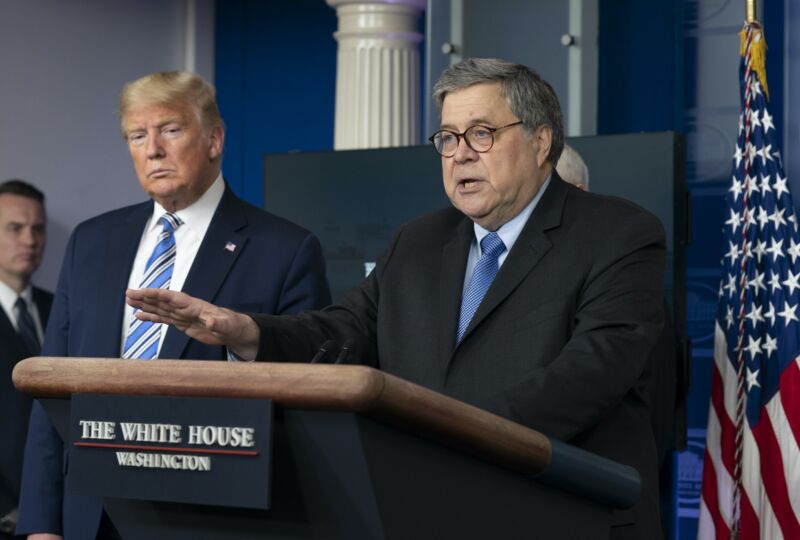 The Trump administration is threatening to sue states and municipalities whose pandemic orders infringe on people’s rights or cause “undue interference with the national economy.”

“I am directing each of our United States Attorneys to also be on the lookout for state and local directives that could be violating the constitutional rights and civil liberties of individual citizens,” US Attorney General William Barr wrote yesterday in a memo to all 94 US attorneys’ offices. The Barr memo said that “even in times of emergency, when reasonable and temporary restrictions are placed on rights, the First Amendment and federal statutory law prohibit discrimination against religious institutions and religious believers.” The memo is available at The Washington Post website.

Barr’s memo is not just aimed at protecting members of religious groups. He continued:

The legal restrictions on state and local authority are not limited to discrimination against religious institutions and religious believers. For example, the Constitution also forbids, in certain circumstances, discrimination against disfavored speech and undue interference with the national economy. If a state or local ordinance crosses the line from an appropriate exercise of authority to stop the spread of COVID-19 into an overbearing infringement of constitutional and statutory protections, the Department of Justice may have an obligation to address that overreach in federal court.

Barr wrote that he is “therefore directing the Assistant Attorney General for Civil Rights, Eric Dreiband, and Matthew Schneider, the US Attorney for the Eastern District of Michigan, to oversee and coordinate our efforts to monitor state and local policies and, if necessary, take action to correct them.” While Barr said US officials “do not want to unduly interfere with the important efforts of state and local officials to protect the public,” he noted that “the Constitution is not suspended in times of crisis.”

The memo did not detail what kinds of restrictions would cause the United States to sue states or cities, and it did not say whether the US will challenge any measures that are already in place. But Barr wrote that local restrictions, while “necessary in order to stop the spread of a deadly disease,” have “imposed tremendous burdens on the daily lives of all Americans.”

Barr previously criticized local policies in interviews, saying that “the idea that you have to stay in your house is disturbingly close to house arrest,” according to a Fox News article last week. “We’re looking carefully at a number of these rules that are being put into place,” Barr said. “And if we think one goes too far, we initially try to jawbone the governors into rolling them back or adjusting them. And if they’re not and people bring lawsuits, we file [a] statement of interest and side with the plaintiffs.”

The Justice Department has so far “intervened in only a single lawsuit over coronavirus restrictions, appearing to back a Greenville, Mississippi, church which had sued over the city’s efforts to shut down drive-in religious services,” The Washington Post wrote. The Justice Department “did not unequivocally support Temple Baptist Church in its legal statement of interest, though it said the circumstances the church described ‘suggest that the city singled out churches for distinctive treatment,’ which would be unconstitutional.”

President Trump on April 13 claimed he has “total” authority to override governors and force states to reopen their economies even while the coronavirus pandemic continues. “When somebody is the president of the United States, the authority is total, and that’s the way it’s got to be. It’s total, and the governors know that,” Trump said at a press conference.

That isn’t how it works, as states and local governments have police powers to protect the health and safety of residents with measures such as isolation and quarantines. But Trump’s claim and related developments showed that at least some states aren’t likely to succumb to federal pressure to reopen their economies. New York Gov. Andrew Cuomo said he would not follow a potential presidential order requiring him to lift pandemic orders. Shortly before Trump’s claim, coalitions of governors on the East and West Coasts announced pacts to follow science, not politics, in their decisions on when to reopen economies.

Trump backed down just one day later, saying, “I’m not going to put pressure on any governor to open.” However, Barr’s letter signals that the Trump administration is not done pressuring states to lift pandemic orders.

Update at 10:20pm ET: New York Attorney General Letitia James issued a statement saying she is prepared to take legal action to defend the state’s authority. “Despite the Trump Administration’s failure to do so, states are able to protect constitutional rights and enact policies to curb the spread of the coronavirus simultaneously,” James said. “The Tenth Amendment of the US Constitution is clear that ‘the powers not delegated to the’ federal government shall be ‘reserved to the States.’ Make no mistake: US Attorney General Barr is not the only one prepared to take legal action to guard the Constitution. My office will fight every day to defend it and the rights it affords the great State of New York.” 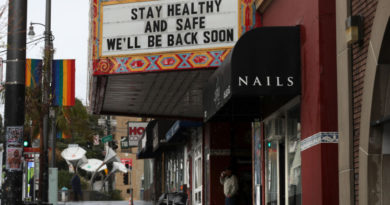 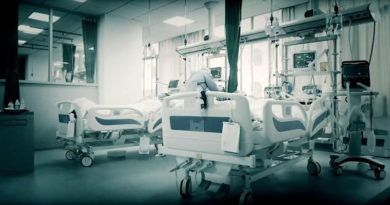