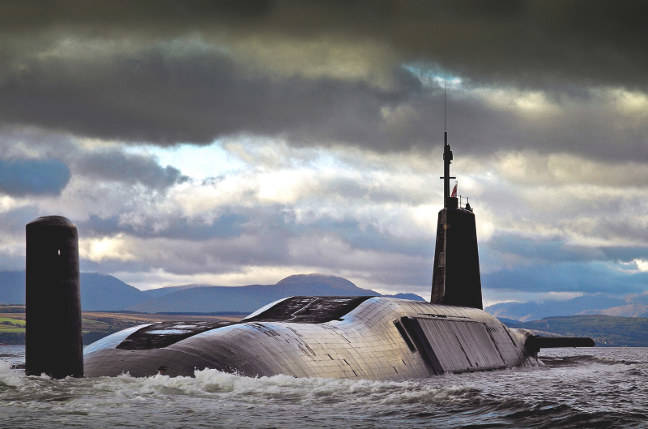 The Ministry of Defence has too many bigshots and not enough grunts – or cash – to reliably keep Britain’s nuclear deterrent hiding beneath the ocean waves, according to Parliament’s Public Accounts Committee.

“At a time when, across the Enterprise, major organisational and governance changes have still to take full effect, the Department needs to bridge a £2.9bn affordability gap, ensure it fills identified skills gaps, sustain its supply chain, and make important decisions on significant, high–profile projects,” warned the PAC, which scrutinises government spending.

While the Dreadnought nuclear missile submarine project is under way, the idea being to build four new boats to replace the ageing Vanguard class submarines currently in service, the PAC warned that “the [MoD] has not met many previous promises and past [submarine] programmes have slipped,” citing the other big British submarine project, the Astute programme, to build seven new attack boats. This is running slightly more than two years late and several million pounds over budget.

Skills shortages, including problems with “attracting and retaining the range of skills they need” has also continued to dog the MoD’s submarine doings, with the PAC saying this is a wider national problem that also affects the civilian nuclear industry.

Also lurking in the background is the small problem of every single previous British nuclear submarine still needing to be safely scrapped. All of them are moored in British naval dockyards, with the MoD having constantly kicked the issue into the long grass in the hope nobody would tell it to foot the hideously expensive bill for dismantling the boats and their nuclear reactors.

This is now a problem because the MoD “does not have enough berthing space at HM Naval Base Devonport to maintain and defuel submarines”, the PAC said.

Over the next ten years some £51bn will be spent on Britain’s nuclear deterrent, according to the PAC, of which £13bn will go on the actual missiles and warheads. £23bn of the sum is being spent on the submarines to carry the deterrent.

While the committee was grudgingly positive about the state of the “nuclear enterprise” (the term for the whole project, from submarines at sea through to companies such as Rolls-Royce, who build the nuclear reactors), it did not identify any safety problems, these being outside its scope.

Lest readers think they can sleep peacefully in their beds, however, it is important to note that the Atomic Weapons Establishment stores at least some of its data on the public cloud. ®