A hacker has allegedly posted a dataset to the dark web containing the personal information of almost 500 million WhatsApp users.

In the post, which was uploaded to hacking forum BreachForums on November 16, the hacker claimed to be selling up-to-date personal information of 487 million WhatsApp users from 84 countries. In the post, the alleged hacker said those who bought the datasets would recieve “very recent mobile numbers” of WhatsApp users.

The leak was originally reported by technology news site CyberNews, which said it had “investigated” a sample of the data set provided by the hacker. According to CyberNews, the site was able to verify that 1,914 phone numbers provided by the malicious party did belong to WhatsApp users, meaning the hacker’s claims were “likely…to be true”.

According to the bad actor, among the 487 million records are the details for 32 million US users, 11 million UK users and six million German users. CyberNews reported that the hacker had told them that they were selling each of these data sets for US$7,000, US$2,500 and US$2,000 respectively. 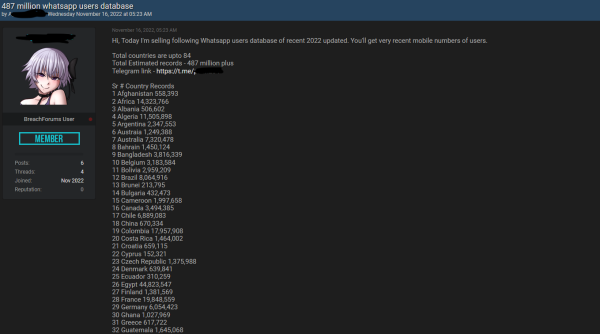 The hacker did not explain how such a large amount of user data had been collected, saying only that they had “used their strategy” to obtain it.

This news comes just days after it was reported that WhatsApp’s parent company, Meta, had allegedly fired employees for breaking Facebook’s terms of service by hacking into user’s accounts.

Meta has since denied the data leak, with an unnamed spokesperson allegedly reaching out to multiple news sites who have reported on the leak on November 28. According to these news sources, the spokesperson has said that the CyberNews article is based on “unsubstantiated screenshots” and that there is “no evidence of a ‘data leak’ from WhatsApp”.

As of writing, there has been no official statement from WhatsApp or its parent company Meta on the alleged data leak.