On April 24, 2022, a privilege escalation hacking tool, KrbRelayUp, was publicly disclosed on GitHub by security researcher Mor Davidovich. KrbRelayUp is a wrapper that can streamline the use of some features in Rubeus, KrbRelay, SCMUACBypass, PowerMad/SharpMad, Whisker, and ADCSPwn tools in attacks.

Although this attack won’t function for Azure Active Directory (Azure AD) joined devices, hybrid joined devices with on-premises domain controllers remain vulnerable. Microsoft Defender for Identity detects activity from the early stages of the attack chain by monitoring anomalous behavior as seen by the domain controller. In addition, signals from Defender for Identity also feed into Microsoft 365 Defender, providing organizations with a comprehensive solution that detects and blocks suspicious network activities, malicious files, and other related components of this attack. Microsoft Defender Antivirus detects this attack tool as the malware family HackTool:MSIL/KrbUpRly.

Originally, KrbRelayUp supported only one method that’s based on taking advantage of resource-based constrained delegation (RBCD); it later added several additional attack methods. In this blog, we discuss RBCD to provide further insights into how the initial KrbRelayUp attack method works. We also detail the stages that make up the said attack. Finally, we provide recommendations and guidelines that can help organizations strengthen their device configurations and defend their networks from attacks that use this tool.

Understanding the attack: What is resource-based constrained delegation?

Resource-based constrained delegation (RBCD) represents the key to this attack method, enabling the tool to impersonate an administrator and eventually run a code as the SYSTEM account of a compromised device.

An authentication protocol verifies the legitimacy of a resource or identity. When a user signs into a website, that website uses a methodology to confirm the authenticity of the resource requesting access. In simpler terms, the authentication process involves signing in with a password—made possible by the user knowing the password anticipated by the website. The Kerberos protocol serves as the main authentication framework for this process in on-premises Active Directory.

Initially, only users with the SeEnableDelegation role could configure delegation, typically domain admins. These domain admins can manage resources and dictate which identities can act on behalf of a different resource. They achieve this by updating the msDS-AllowedToDelegateTo property of a user account or device. This property contains a list of all the unique identifiers (service principal names, or SPNs) to which this object can delegate or act on behalf of.

However, as organizations expanded, administrators struggled to manage all the delegation requirements, raising the need for a new type of delegation: resource-based. For instance, in an organization with several file servers that all trust a web server for delegation, an admin would have to change the msDS-AllowedToDelegateTo priority in all of the different file servers to introduce a second web server. With resource-based delegation, the list of trusted computers is held on the receiving end. Thus, in our example, only the newly created server would require a change of settings.

For the RBCD method of the KrbRelayUp tool to work, the LDAP protocol must not use signing to communicate between LDAP clients and domain controllers. While this setting is still the default on Windows, as of 2019 Microsoft recommends configuring LDAP to use LDAP channel binding and signing.

LDAP is one of the main protocols that directory services tools, such as Active Directory, use to query and access directory information. By default, LDAP is vulnerable to credential relaying attacks. For example, in a credential relaying attack, a web server requesting a password to sign in would have its request relayed by an attacker to an authorized client. The attacker then relays the client reply containing the correct password back to the server, thus signing in. Once the attacker is signed in, they have the same permissions as the user whose credentials were relayed.

Initially, the ability to obtain such an account was a prerequisite for this attack method, but since the release of the tool, other security researchers found ways to get around this requirement.

To launch an attack using the RBCD method of KrbRelayUp, an attacker performs four main steps:

Step 1: Acquisition of a suitable resource

The attacker first obtains a resource suitable to be the source of an RBCD. There are several ways to obtain such a resource; the most straightforward way is to create a new computer account as discussed above.

Step 2: Modification of the msDS-AllowedToActOnBehalfOfOtherIdentity attribute

The new KrbRelayUp tool implements this step with these two smaller consecutive actions:

After this step, the attacker has a valid ticket for the local device that allows the administrator to be impersonated.

The last step leverages the attacker’s newly acquired ticket to run code on the device. In the attack, as it’s published online, the Service Control Manager (SCM) is asked to create a new service with SYSTEM permissions.

It’s important to note that KrbRelayUp cannot be used in attacks against organizations that are only using Azure AD. However, in hybrid identity environments where organizations synchronize their domain controllers with Azure AD, if an attacker compromises an Azure virtual machine using a synchronized account, they’ll receive SYSTEM privileges on the virtual machine.

To reduce the impact of this threat, organizations should apply the mitigations below. Microsoft 365 Defender customers can check the recommendations card for the deployment status of monitored mitigations.

Organizations should also deploy a comprehensive security solution like Microsoft 365 Defender to detect and block this threat across the stages of the attack chain. Microsoft 365 Defender has multiple layers of dynamic protection technologies, including machine learning-based protection, and correlates threat data from email, endpoints, identities, and cloud apps to provide in-depth and coordinated threat defense. All of these are backed by threat experts who continuously monitor the threat landscape for new attacker tools and techniques.

Microsoft Defender Antivirus detects a threat from the KrbRelayUp tool as the following malware:

Microsoft 365 Defender customers may refer to the threat analytics report to determine if this threat is present in their network and to get additional details and recommendations. Threat analytics enables organizations to assess the impact of a threat to their network, review exposure and resilience, and perform mitigation, recovery, or prevention actions to stop or contain active attacks.

Learn how you can stop attacks through automated, cross-domain security with Microsoft 365 Defender. 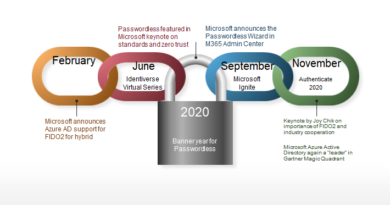 A breakthrough year for passwordless technology