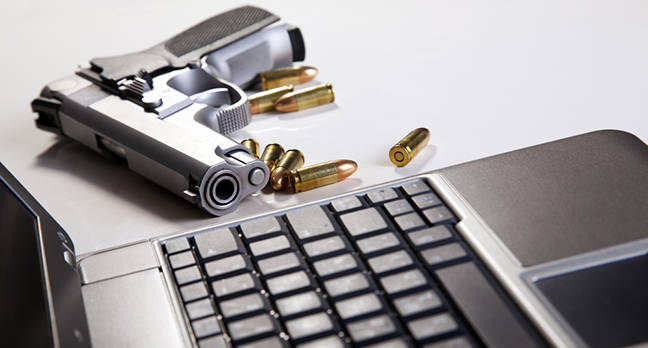 Apple’s head of global security tried to bung cops hundreds of free iPads in exchange for special gun permits, it is claimed.

According to prosecutors, between February and August last year, Undersheriff Rick Sung and Captain James Jensen refused to issue four concealed-carry weapon (CCW) licenses to Apple employees unless the pair got something in return. Moyer, it is claimed, promised to donate 200 iPads, worth about $70,000 at retail, to the sheriff’s office in exchange for the permits, it is alleged.

The deal was scrapped by Moyer and Sung after the county district attorney stuck a probe into the sheriff’s operations, and got a search warrant to obtain the office’s CCW records in August last year, it is said. Sung, 48, and Jensen, 43, have been charged with receiving or asking for bribes.

Insurance broker Harpreet Chadha, 49, was also charged with bribery. It is said he promised Sung, in exchange for a CCW license, $6,000 of box suite tickets for a San Jose Sharks ice-hockey game at Silicon Valley’s SAP Center on Valentine’s Day last year. The suite was used by Sheriff Laurie Smith’s relatives and some of her biggest political supporters to celebrate her re-election as sheriff, prosecutors said. Smith has not been charged with any crimes.

Moyer’s lawyer Ed Swanson is quoted as saying his client “is innocent of the charges filed against him.” Ditto for Chadha: his attorney Guy Jinkerton reckoned the case “appears to be a grave miscarriage of justice.” The briefs believe Moyer and Chadha were caught in the crossfire of a political fight between Smith and Rosen.

As the name suggests, a CCW license gives a person permission to carry a gun around with them that’s concealed in some way, and they can be difficult to obtain in the US state of California, depending on where you are. They aren’t issued to normal folks in the big cities, though they may be handed out to law-abiding people in the sticks.

In a statement, the county sheriff’s office said: “This is a difficult time for our organization, however, our goal remains to provide the highest level of public safety to the residents of Santa Clara County. The hundreds of men and women who represent the Sheriff’s Office will continue to serve our community with compassion, honesty and integrity.”

A spokesperson for Apple was not available for immediate comment. Moyer was tasked with overseeing the iGiant’s ethics and compliance programs, safeguarding prototypes and other intellectual property, maintaining physical security of staff and buildings, carrying out crisis management, and so on. ®